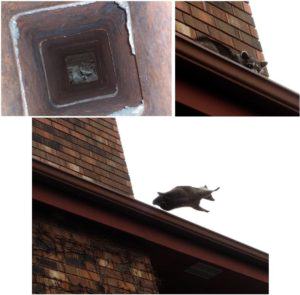 A call came in requesting an appointment, needing one sooner than later. The customer on the phone said there was an odor coming into the home and thinks it’s from the chimney.

The service technicians set up the ladder and made their way to the chimney noticing a chimney cap was missing. Many times when a customer contacts Superior Chimney with an animal problem, they hear scratching noises or animal sounds indicating a trapped animal. This wasn’t the case. However, with a missing chimney cap, it’s best to proceed with caution. Our furry friends may be home.

We carefully began our inspection and it didn’t take long to see where the ‘smell’ was coming from. Our masked friend, the raccoon, had built a very cozy, but smelly den in the base of the chimney. We encouraged her to come out of the chimney and she quickly hid in the gutter. We continued to encourage her departure and she took a flying leap off the roof into a nearby tree. No worries, she was just fine.

After the raccoon departed, we cleaned out the chimney and installed a new chimney cap.

It isn’t safe for animals to be living in the chimney. If you hear noises, or smell a new and unpleasant odor, contact Superior Chimney today to ensure the safety of you, your family and our outdoor friends. Call us at 877-CHIM-FIX or 877-244-6349. Visit online: www.superiorchimney.net