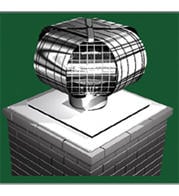 Venturi Effect & The Vacu Stack - When the wind blows, the air is forced around vacu stack chimney caps rather than though their openings.  This creates the Venturi effect at the top of the chimney and can correct your chimney smoke problem.  The pressure inside the chimney is decreased and Bernoulli's principle goes to work, forcing exhaust in the chimney up & towards the top, increasing the upward draft, preventing fireplace smoke back up.  The harder the wind blows, the more upward draft will increase - And it doesn't matter which direction the wind is blowing!

Wind Induced Downdrafts & The Vacu Stack - The downward flow of air into a chimney is usually caused by the deflection of wind by obstacles higher than the chimney such as neighboring tall trees, roofs, home additions, and other buildings or homes.  A wind downdraft may even be a low speed "breeze".  This can cause chimney smoke problems or fireplace smoke in house.

*Superior Chimney's CSIA (Chimney Safety Institute of America) Certified Chimney Sweeps will evaluate your chimney and recommend any corrective action to ensure that it is capable of proper & sufficient draft and flow.  Fireplace smoke back up & other chimney smoke problems are accompanied by many serious potential hazards. 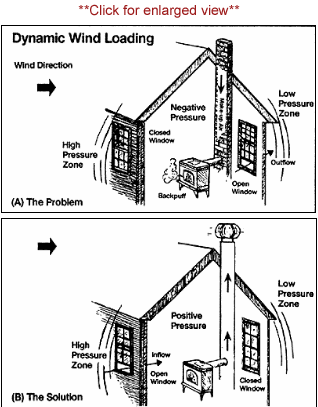 Dynamic Wind Ioading & The Vacu Stack - Can occur when the wind causes negative air pressure.  Negative air pressure and consequent telltale back puffing of smoke may be particularly noticeable when a door or window is opened on a side of the home other than the windward side. To restore normal pressure in the home, make up air is apt to enter via the chimney and come down into the living area. If the appliance is operating, smoke is then carried into the room.  This is one example of chimney smoke problems that the vacu stack chimney caps can correct.

* In a relatively airtight house, negative pressure problems can be caused by appliances that exhaust the inside air out of your house, such as cooking ranges, bathroom exhaust fans, a clothes dryer vent, furnaces, attic fans, or other devices.  This describes many common chimney smoke problems and fireplace smell entry issues.  Your individual chimney smoke problems may be the result of a variety of factors.