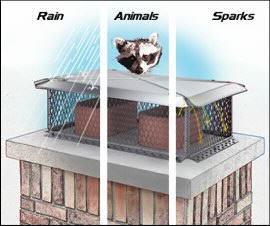 Snow & Rain Cap - Your chimney inner is constructed of porous masonry and/or metal materials, including; firebrick, high temperature mortar, fire clay tiles, steel, and cast iron. All of these materials will suffer accelerated deterioration without a rain cap as a result of element exposure & water saturation.

Animal Guard - Chimney caps keep out birds, raccoons, squirrels, and bats, which see your chimney as a good place to nest and raise their young. This is just the beginning of many serious issues. Nesting, debris, and feces can obstruct exhaust flow & emissions (smoke and poisonous carbon monoxide fumes can't leave your home).  The babies often cannot get up and out of the chimney and will perish.  You are then left with hard to remove awful odors, maggot infestation (flesh flies), air borne diseases, etc. Additionally, nesting is highly flammable which can cause a chimney fire.  Superior Chimney's chimney caps will prevent all of this!

Wind Inhibitor - Chimney caps eliminate & minimize minor wind downdrafts from blowing down your chimney. Wind coming down the chimney can disturb your enjoyment of the fire burning experience by causing smoke back up.

Chimney caps are the most inexpensive preventive measure you can employ to prevent water penetration and damage to your chimney. Your chimney has one or more large openings (flues) at the top and without a chimney cap will collect rainwater and funnel it directly to the chimney interior. Superior Chimney's strong, well-designed, professional grade chimney caps will also prevent raccoons, squirrels, birds, and bats from entering and nesting in your chimney.

Homemade screens or chicken wire laid flush across the top of the chimney flue is a recipe for disaster.  Flush chicken wire and netting allow for potential ice over (snow accumulations).  This can restrict exhaust flow emissions (poisonous carbon monoxide gas and smoke). Superior Chimney's professional grade chimney caps are the proper and safe install.

Having a plugged-up chimney cap (or improperly sized chimney cap) at the top of your chimney is just like having a closed nozzle at the end of a hose - you just can't get any airflow through the chimney.

Not just any chimney cap will do! 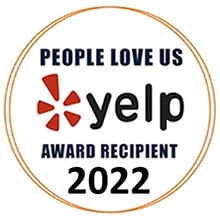