As I looked at today’s date, I am amazed at how fast summer is going. There’s many projects that need to be done around the house, kids have to be dropped off and picked up and let’s not forget our jobs. How can I be talking about chimney repairs and chimney cleaning now?

A neighbor reminded me.

Our neighbor across the street had a new roof installed a couple weeks ago, and it looks fantastic. While outside, we did our neighborly wave and I said loudly, “The roof looks amazing!” Their smiles went down a bit as they gave a bland, ‘Thanks’. I quickly asked, “What happened?” 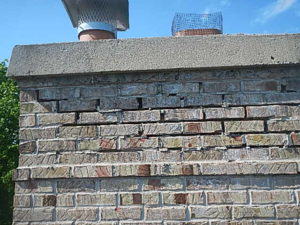 The roofers gave them pictures showing the current condition of the chimney and said to get someone out to repair the chimney before it gets any worse. Our neighbors had no idea. How could they? It’s not like homeowners go on top of their roof for a stroll.

They asked me about Superior Chimney and the work they did on my chimney. I explained how Superior Chimney tuckpointed the entire chimney, sprayed Chimney Saver which prevents water penetration and absorption, and completed a thorough cleaning on the chimney and fireplace.

Getting the job done right is critically important, but so are the smaller things. Things that help confirm the right choice. For instance:

That’s why my neighbors asked for the company that fixed my chimney. It was great work done by professionals with lots of experience.

Waiting will only cost you money. Get your chimney checked and cleaned. Give us a call today at 877-CHIM-FIX or 877-244-6349. Visit online: www.superiorchimney.net